I found out at the beginning of the month that my high school boyfriend Matthew Driver died by suicide on May 22nd.

As teenagers, our relationship had grown out of our shared experiences of depression and self-harm. At an age when it’s not unusual to feel misunderstood, we found a deep connection to what felt like the darkest parts of each other.

But we also had fun. 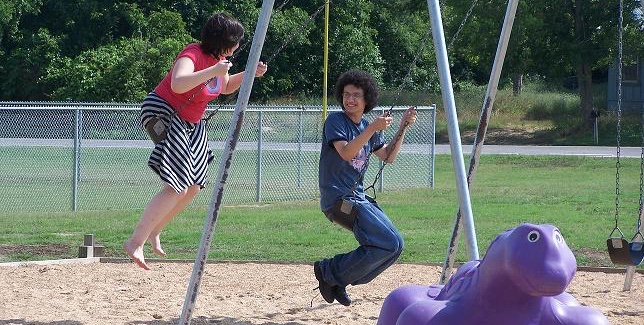 He gave me the silliest nicknames, a few of which I’m not sure I’ll ever escape. We drove around in his SUV listening to Bright Eyes, sometimes “hiding” a friend in the trunk so we could sneak one more person off campus for lunch.

We shared queso at Taco Cabana and made tamales with his family and I ate the pancakes he made for me in his childhood kitchen.

I dragged him to the Homecoming dance; he even smiled in some of the pictures I took, which wasn't something he normally did. We watched “The Exorcist” and “Return of the Living Dead” more times than I can count.

We were both prolific on LiveJournal and commented on almost every entry the other posted. He helped me write my first line of CSS to customize the background of my journal.

He made handmade cards for me with stickers and silly drawings, and I made him a scrapbook for our one year anniversary. He stumbled across it a few years ago and sent me photos; it was simultaneously painful and funny to look at. 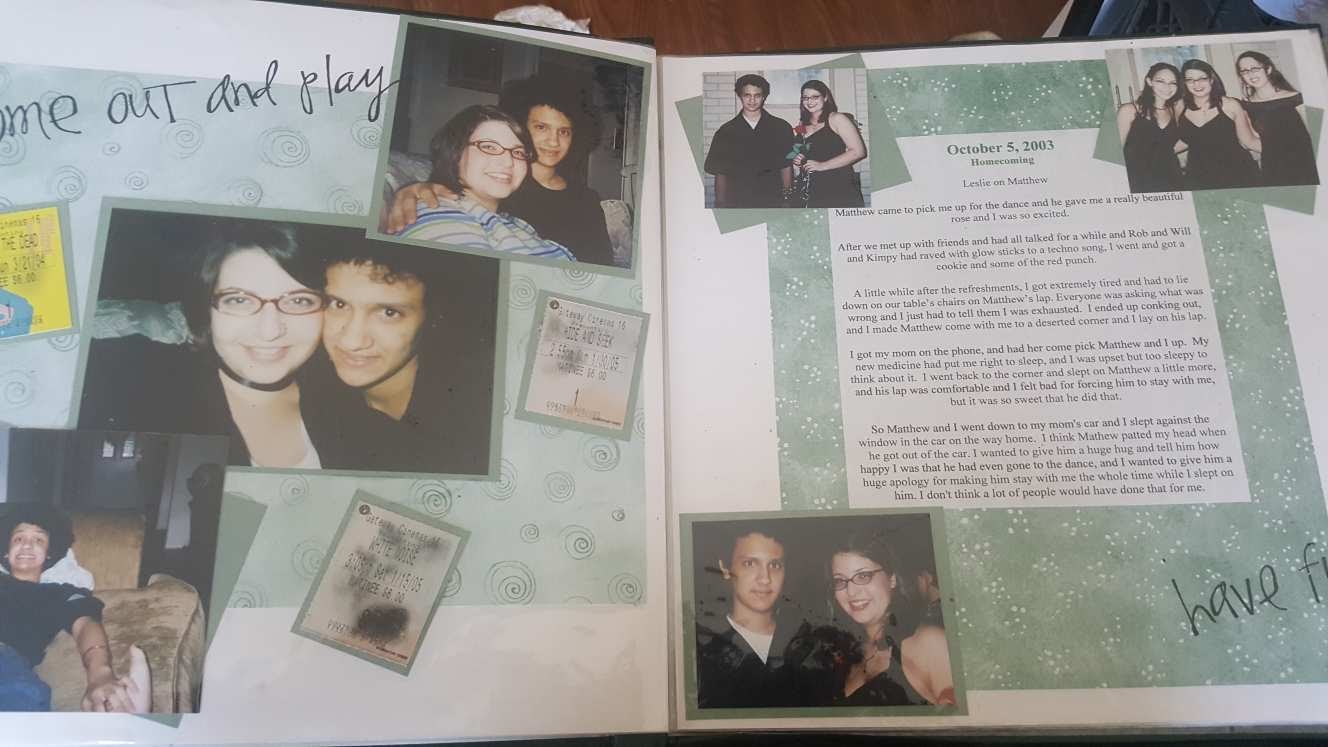 We emailed each other constantly, especially after he coerced me into switching from Netscape to Gmail for more storage space. When I search my inbox for his goofy old email address (rawrimazombie!), I can easily end up on page 350 “of many.”

We made each other mix CDs where 75% of the songs were Bright Eyes. “Something Vague” was our favorite; it was included on every single mix.

But now I'm confused.
Is this death really you?
Do these dreams have any meaning?
No. No, I think it's more like a ghost
That's been following us both.
Something vague that we're not seeing,
Something more like a feeling.

He gave me a ring. It didn't mean what you think it means, but it also meant everything. We experienced a lot of firsts together.

It didn’t end well, but that’s probably true of most high school relationships. As is typical, graduation became a natural ending and simultaneous new beginning.

Matthew reached back out to me in 2017 and it was like no time had passed; we started messaging back and forth every few months. I felt guilty that he was (still) mired in depression, trying to survive addiction and an abusive relationship.

Everyone has their challenges, but I was in a good place: I had gotten married in 2015, moved from NYC back home to Texas, and was busy with my first remote dev job. I was perpetually scared of getting dragged back beneath the depths of depression myself, so some days it was hard to talk to him.

If I’m being honest, I gave him a lot of tough love during those conversations. But he kept messaging me, and I was always there. We were still inextricably connected.

The past is a strong drug.

The last time we talked was a month before he died. He seemed to be doing well, at least based on what he told me: he was celebrating 30 days sober and finishing his first semester back at college.

(He was studying computer science, which he'd also taken in high school. I now realize Matthew's interest in CS helped spur mine; it's part of the reason I’m a software engineer. We talked a lot in those later years about what his coding career could look like.)

I had told him a few months earlier that Bright Eyes was putting out a new album following their nine year hiatus. Our final conversation started because he wanted to know if I’d heard their latest song.

I hadn't, so I listened to it. And then I sent him this sadly hopeful Matt Hires song, which reminded me a bit of early Conor Oberst from “Fevers and Mirrors.”

The song is about death, but also about life being what you make it.

And oh my my, honey everybody dies
But you got, you got to see
That you can live your life walking in a straight line
But it's more than just A to B.
Maybe it'll find you lying peaceful under blankets
Or bleeding at the bottom of the stairs
Oh but it's not when or how you go
It's life and what you make it
It's the traveling, not the road that gets you there

It is the last song I will ever send him.

I felt silly and self-important for crying so much the week I found out Matthew died. It was the same week the world had started reeling from the news of George Floyd’s murder at the hands of the police (during a global pandemic, no less).

I tried to distract myself from the guilt I felt for having such a strong reaction to Matthew's death. Dying is a big deal to those who are left behind, but it felt like a very personal sidebar during a world uprising about systemic injustice, set against a backdrop of overflowing hopsitals and makeshift morgues.

Matthew’s death wouldn't change my day-to-day much, if at all. He wasn’t a fixture of my life anymore.

But he had been.

My friend Kate Kaput lost her high school boyfriend to suicide in 2005. She has written about Dave a lot since then, and her words have helped me get through the weeks:

To remember love lost, to honor a life lost, to reflect on the ways that someone's life & death changed your fundamental existence... that's not weird. That is very, very normal.

These words gave me permission to grieve.

These words helped me realize that it’s okay to talk about him, to write about him, to share that writing. I'm doing this because I need you to know he lived, and that he mattered. 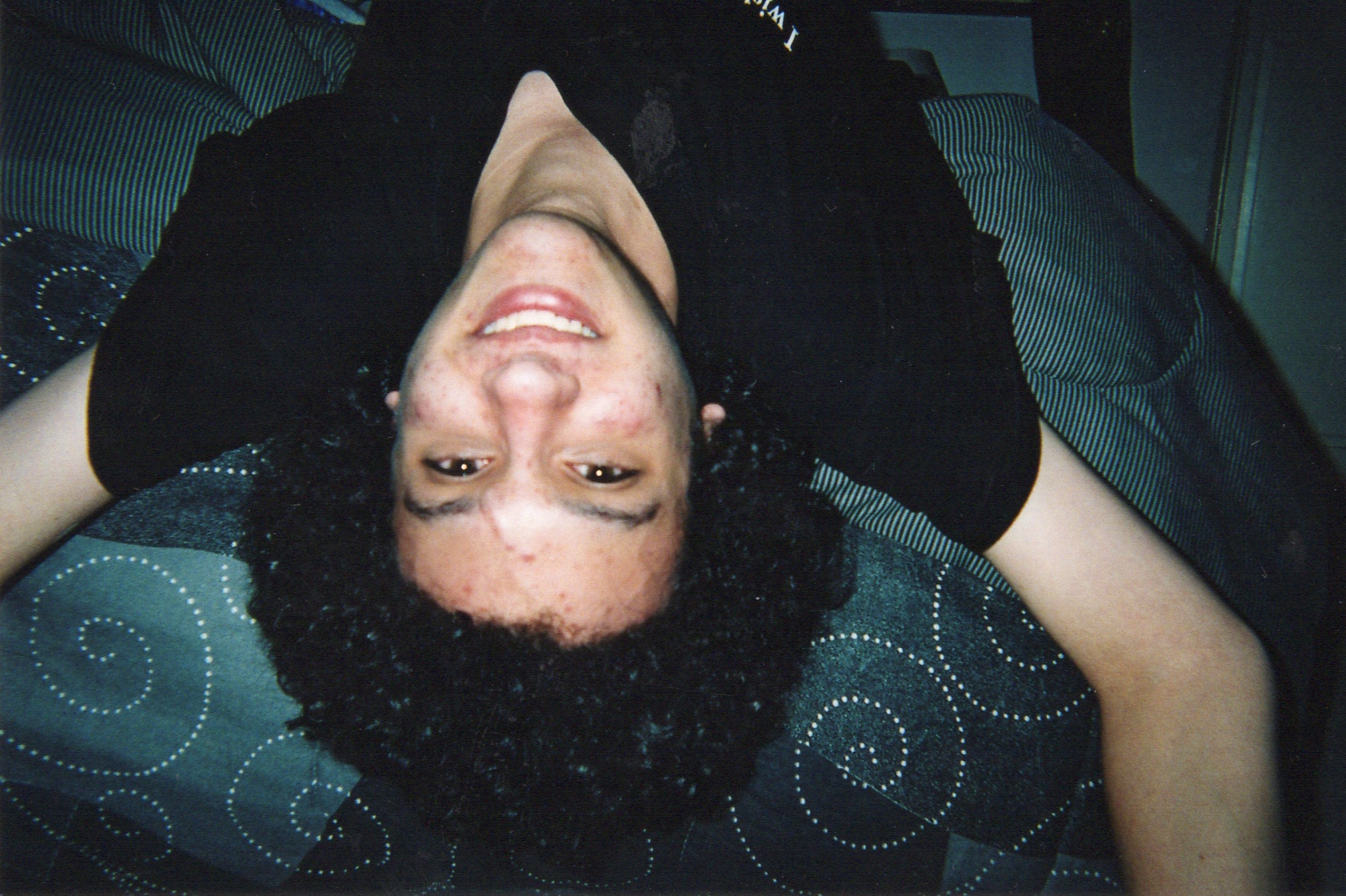 For me, right now, it’s about being open and honest about the impact of suicide. It's about asking for help when I need it, and moving past the shame of feeling so much or wanting to share it. It’s about remembering Matthew and finding ways I can support others who struggle with mental illness.

It's about challenging myself to engage in the fight against injustice that is so apparent in our world, even when I've been complicit in it, and even when it's hard. Especially when it's hard.

It’s also about allowing myself - forcing myself, even - to take the time and space to feel each painful feeling as it comes up. Because I have to. Because there isn't another choice.

When staring down the barrel of what feels like insurmountable anger and pain and despair, it all seems to come down to this: knowing (and trusting) that we are not alone. Even when it sure as hell feels like it.

Well, I guess that it's typical
To cling to memories you'll never get back again
And to sort through old photographs
Of a summer long ago
Or a friend that you used to know
And there below his frozen face
You wrote the name and that ancient date
And you can't believe that he's really gone
When all that's left is a fucking song
And I'm sorry about the phone call and waking you
I know that it is late
But thank you for talking, because I needed to
Some things just can't wait

If you are struggling with thoughts of suicide, please reach out. In the U.S., help is available 24/7 by calling the National Suicide Prevention Lifeline at 1-800-273-8255.